Destination of this trip was Oman in the Middle East. I have not been further than Bahrain and Dubai, But just a three quarters of flying further There is Oman. I have never been in Oman before. In May of this year I met a delegation of Oman in Bahrain during the e-Government forum. It was a colourful group of people, especially as the men sport cololourful headgear. But before leaving for Oman, I looked up the country profile. I found out tthat the country is vast, but has only less than 3,3 million inhabitants. That generates quite a different score for the square meters per inhabitant, from the Netherlands with its 16,2 million inhabitants. In Oman you square kilometers per inhabitants.

I arrived late at night and did not see anything. I was taken swiftly to the hotel, where the western Christmas songs were playing around the clock with Christmas trees spread around the lobby and the restaurant. It is a estranging experience, a kind of culture clash. But of course I was only interested to catch some sleep as I was supposed to present a workshop. In the morning I was driven to the Oman Knowledge Oasis, a business and science park at the foot of a mountain range. 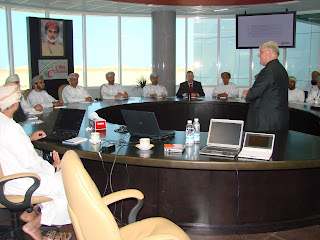 The workshop is organised by the ITA, the IT Agency of Oman. This agency is to stimulate IT in Oman government and the country. Last the country partook in the World Summit Award competition and was a winner in the e-inclusion category with its cross-media university application system. Last year's Grand Jury saw Zawan as Omani eminent expert in the Grand Jury. The workshop was to present the way the World Summit Awards works and how the Omani can participate more in it, can set up their own national content competition and look into an e-Government competition of their own.

There were some 35 participants in the workshop, mostly of government departments and agencies. The first days was a general presentation. Tomorrow I will be sitting at the table with officials and talk about the participation in the 2009 edition as well as setting up a national e-content competition. I am anxious to hear their plans as it means that the Omani are seriously developing its internet industry, shaping products and services.

After the meetings I will be shown around Muscat by air-conditioned car. It is some 27 degrees celsius, but humid. I am really eager to see part of the country, as I understand that the country has several panoramic faces. I was hoping to upload the posting about my trip to Oman earlier. But the Golden Tulip hotel in Oman has Wi-fi, but is charging an unbelievable amount of money fot the service. A card for 24 hours is supposed to cost 23 euro. This looks like asking for water in the middle of the desert. Its is interesting to see the difference between countries. In Finland Wi-Fi has become a hotel commodity included in the tariff, while here in Oman it still is a hefty add-on.