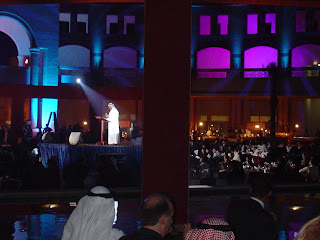 Today I was the guest of the Knowledge and Human Development Agency in the International Academic City Dubai. Academic City is a development of universities (private and government) such as the private Zayed University, government agencies and companies. It is one of the thematic newer cities in Dubai. When I was with the Grand Jury of the World Summit Award in Dubai in 2003, Internet City had just started. It was a clean business park nicely laid out, where companies like Microsoft based their offices. In that time also the Knowledge Village was opened. I did dig up an old photograph of that opening ceremony (see photograph). I remember the crown prince was present and there was a buffet for all guests; in my estimation some 600 people.

But now the Knowledge and Human Development Agency has overtaken Knowledge Village and grown in importance. In 2003 it was clear that the United Arab Emirates would not live from the smell of oil into eternity. Internet City and Knowledge Village were the first diversification efforts. But now knowledge has become more prominent. In fact so prominent that Sheikh Mohammed Bin Rashid Al Maktoum has made the statement: I want Dubai to be number one in everything, higher education, health, housing. So strategic plans have to be developed as well as policies, laws and regulations to improve learning and human development. In practice that means setting Dubai’s education standards in collaboration with Federal Ministries and oversee the implementation of learning and human development policies through agencies, corporations and private sector contractors

In this way Dubai wants to create a knowledge-led society where all participate in Dubai’s sustainable economical development making the strategy happen. This is where the KHDA comes in. It will have to deliver these objectives,. KHDA will place emphasis on ownership of knowledge and responsibility. To implement the strategy the following agencies are to be created:
- early learning
- schools (already operating)
- tertiary education (covering higher and further)
- skills and Workforce Planning
Each agency will be supported by an inspection body and will report to KHDA.

Within the KHDA an innovation unit is active. It was established for the commitment to create the environment needed for developing humans in an era and an area marked by constant change, the KHDA Innovation unit was established. To participate in creating a better future for generations to come actions will have to be recommended on the basis of findings in Futures Studies conducted locally and internationally. The purpose of the unit is to utilize various methods and tools to help the KHDA
prepare people/community for unseen yet needs and demands. The unit conducts various projects related to anticipating the future and helping to build desired ones. The unit also aims to cooperate and create partnerships, locally and globally with entities working on similar projects worldwide. It is quite an assignment.

Head of this unit is Hind, who was a WSA judge in Bahrain in 2005. She works with a unit of smart people, who are looking all over the world for Future Studies, but also put together programs for putting computers in schools and organising Innovation festivals. To put it black and white: it is a daunting task to change a society, living of the benefits of oil production into a society, which lives from knowledge products and services as well as innovation and diversification.