It was early day. Here the people begin to work at 7h0 and leave work at 3h30. I was ready to be picked up by the ITA driver at 7h30. The second day of the workshop was intended for managers of the ITA and of other government agencies. As usual for managers, time was short, but it was possible to present an impression of the quality standards of the Grand Jury and the winning products and services. During the discussions I noticed that I was talking from a very privileged situation with an internet connection of 10Mb at home. In Muscat there is ADSL of the first generation. And only 3 percent of the 3 million people have an internet connection. The WSA national expert Zawan is charged with the task to increase the number o internet users through a program. Students will get an ASUS for school and in the end also primary schools will b linked and get computer labs. It is a very ambitious program from what I heard.

A lunch was offered after the workshop and that ended the second day; see the press release. I got a chance to work on the postings as I got contact through a limited wifi connection. I could get sites, but I could not get mail. Still I got some work done.

After refreshing myself at the hotel, which was really necessary after running the workshop with presentations and questions and answers, I was picked up by Sangeetha, who generously offered me a tour of Muscat in her private time. So far I had only seen the way to the Knowledge Oasis Muscat. But this was about to change. Sitting high in the front of a 4wheel drive I was able to look at all the traffic which moves back and forth along the road through Muscat. It really is one long line at the foot of the mountains. 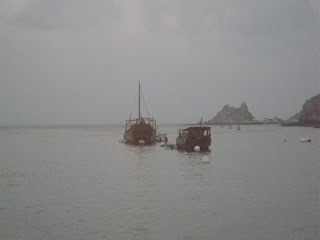 I got to see the old city with its Corniche and we went to the royal palace of the Sultan of Oman. It is a city of great differences with a beautiful diplomatic area to a crowded area around the souk. Muscat has a port and has a long standing history of seafaring. One of the three yachts of the sultan had docked in the port, while a little bit further two dhows, old sailing boats, were anchored. A little bit further from the port is the harbour of the royal palace, guarded by two forts. 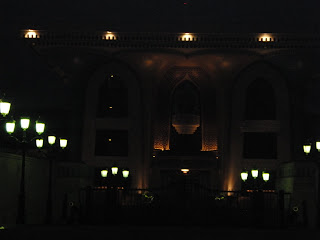 We had a chance to see the royal palace, despite the fact that the light was fading by 6h00. I was able to take some pictures; they are not the best; yet the ones Sangeetha and her son were very good, but we did not have time to exchange them (you can however see them on Flickr). We ended the tour with a visit to the souk. It as a very colourful marketplace with a lot of handcrafted products, silverwork, shawls, daggers; you name it. 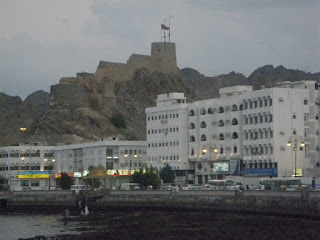 Thanks to Sangeetha I have seen at least something of Muscat, but not yet much of Oman. From her I understand that next time I should also go in the interior into the mountains to Nizwa. Oh well, there is always something left to wish. And hopefully there will be a next time, insjallah (if Allah will).